What is Game Theory?

Game theory is the science of interactive decision-making. It has an origin in mathematics and is used in economics, business, political science, psychology, computer science and more. It provides a language for the representation and analysis of interactive situations, where actions of each player affect each other.

Game theory can get confusing, there are mathematical models to show the different outcomes depending on what information is known or not known.

There are games with perfect information such as tic-tac-toe or chess, that have a perfect strategy that can yield a predictable outcome. Like in tic-tac-toe, you can know the best moves so at the very least you can get a draw. There are also some games that do not have perfect and complete information or strategies for winning. Like poker, there is no pure strategy that can ensure a draw or win. (Link)

There are many game scenarios. There are large and complicated books that go through the mathematics, probabilities, and equations for determining strategies and making choices, but I don’t think that is as helpful from a business perspective. It is helpful to understand some of the terminology that is brought up, such as zero-sum game. Zero-sum games are like rock-paper-scissors where one player wins and gets all the money, the other player loses and loses all the money. Poker is an example of a game that is not a zero sum game. It is more complex.

There are competitive situations where there are many players and that are not zero-sum games. Real life “games” are not zero-sum, they involve infinite strategies with many players that are cooperating and forming teams. This has led to mathematical analysis showing a generalization of von Neumann’s optimal solution called an equilibrium solution. An equilibrium solution is a set of strategies for each player that results in an optimal outcome if every player sticks to their equilibrium strategy. (Link)

An important generalization is that: “Any many-person, non-cooperative, finite strategy game has at least one equilibrium solution”. (Link) This is called the Nash equilibrium, which earned him a Nobel Prize in economics in 1994. Again in my opinion, understanding the Nash equilibrium isn’t the most helpful thing to a business operator, but it is useful to recognize the term.

The most straightforward and practical explanation of Game theory I have found comes from the authors Adam Brandenburger from Harvard Business School and Barry Nalebuff from Yale School of Management in their book Co-opetition, which the following sections are based on.

It starts with understanding some of the key interactions that business can have with each other in the game.

Understand complements. Examples of complements are hardware and software, cars and roads, loans and buying cars, auto insurance and cars. The more cars people buy the more insurance they buy. Some industries are connected to the point that one can’t survive without the other. It is about finding ways to make the pie bigger rather than fighting with competitors over a fixed amount of pie. 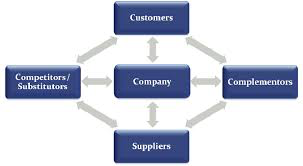 The following card game/experiment is described in the Co-opetition book that Adam and Barry use as an example to introduce game theory. The prize is $2,600. You get $100 for turning in a pair of cards, one red, one black.

The professor holds 26 black cards, and the students each get one of 26 total red cards.

The rule is that students have to bargain on an individual basis, they are not allowed to bargain as a group.

Neither position, the red or black card holders have an edge when there are 26 red cards and 26 black cards. The result of the negotiations always ends up being a 50/50 split. Where the professor agrees to give $50 to the black card holder and $50 for himself for turning in a pair of cards.

In the second example the game is changed so that this time there are only 23 black cards, and still 26 red cards. The red card holders this time can’t wait to make a deal because there may not be any deals left when all the 23 black cards are used up. There are three students with red cards that will not get anything. The professor holding 23 black cards could propose a 90/10 split, and the students who face the prospect of ending up with nothing would be happy to undercut those who hold out for just a $20 deal. Proposed splits by the professor of 99/1, don’t work because the red card holders would say, 1 cent isn’t worth it, no deal.

The professor knew that even by decreasing the size of the whole pie, from $2,600 with 26 red and black cards, to $2,300 total (only 23 total black cards and potential pairs), that he would get a sufficiently large slice to compensate for the decrease in potential pairs that are worth $100.

‘The key to understanding who has power in any game such as this card  game can be determined by the concept of added value.”

In the second example of the card game, the professor’s 23 total black cards to the students’ 26 cards, the total added value of the professor is $2,300. The total added value of the students in this example is $0, because no one student is necessary by themselves. This is because any three students could end up with nothing from the negotiations. You could remove any three and the result for the professor would be the same $2,300. Now if the rules changed where students could negotiate together, not just individually, then the result would be different.

Perception: People perceive the game and values differently. Try to uncover and assess how the other players perceive value, ie. their valuations of a company may be lower than your own for example. Let the other party reveal their cards first, and keep the big picture in mind of what their goals might be versus your own.

Games in business are seldom zero-sum and people are not always rational.

Rationality is when people do the best they can based on how they perceive the game. People can seem irrational, but they may have different motivations and perceive the game differently. Work hard at seeing how others see it. Try to understand what motivates them.

Possibly the most profound insight of game theory: “Remember to look at a game from multiple perspectives, your own and that of every other player.”

“How would they (not you) analyze the game from their perspective.”

Always consider your added value, the rules, and perceptions.

“Added Value: Put yourself in the shoes of other players to assess how valuable you are to them

Rules: Put yourself in the shoes of other players to anticipate reactions to your actions

Perceptions: Put yourself in the shoes of other players to understand how they see the game.”

There are five PARTS to the game: Players, Added values, Rules, Tactics, and Scope. Each of these PARTS give you a way to transform an existing game into an entirely new one. Changing the game helps you strategize effectively and is part of the utility in applying game theory to real life. (Link)

Future posts on this topic will be going through Co-opetition. They will cover more specifics on how to think about changing each of these PARTS and how game theory can be more practically applied.

The Time Value of Money

First Paycheck from an Online Side-Project